Commenting on these results, Will Randall, President and CEO of Freeman, stated, “This maiden resource estimate for Lemhi establishes the Lemhi Project as one of the few remaining undeveloped large, high-grade oxide gold deposits in the United States. The estimate exceeds our expectations, bringing several decades of work together, and setting the foundation for further drilling and engineering to both expand the resource and move it closer to the ultimate goal of establishing a low cost producer in a top ranked jurisdiction.”

The Lemhi Project database contains a total of 444 drill holes with 50,712 sample intervals in a sample database with 49,313 samples assayed for gold. The Lemhi Project MRE utilized 364 drill holes (64,391 m) with 277 drill holes completed between 1983 and 1995, and 87 drill holes completed between 2012 and 2020. Inside the mineralized domains there is a total of 15,555 samples analyzed for gold. Standard statistical treatments were conducted on the raw and composite samples resulting in a capping limit of 27.1 g/t gold applied to the composites. The current drill hole database is deemed to be in good condition and suitable for use in ongoing MRE studies. Mr. Michael Dufresne, M.Sc., P.Geol., P.Geo., President of APEX, is an independent qualified person (QP) and is responsible for the MRE.

Modeling was conducted in the Universal Transverse Mercator (UTM) coordinate space relative to the North American Datum (NAD) 1983, National Spatial Reference System 2011, and State Plane Idaho Central, (EPSG:6448). The mineral resource block model utilized a block size of 3 m (X) x 3 m (Y) x 3 m (Z) in order to honour the mineralization wireframes. The percentage of the volume of each block within each mineralization domain was calculated and used in the MRE. The gold estimation was completed using ordinary kriging (OK) utilizing 7,565 composited samples within the interpreted mineralization wireframes. The search ellipsoid size used to estimate the gold grades was defined by modelled variograms. Block grade estimation employed locally varying anisotropy, which allows structural complexities to be reproduced in the estimated block model.

A total of 8,015 specific gravity samples were available and utilized to determine the bulk density. No significant variation of the density was observed between the geological units or mineralized versus un-mineralized zones. The overall average bulk density was 2.62 g/cm3 and was applied to all blocks for the Lemhi Gold Project MRE.

The resource is classified according to the CIM “Estimation of Mineral Resources and Mineral Reserves Best Practice Guidelines” dated November 29, 2019, and CIM “Definition Standards for Mineral Resources and Mineral Reserves” dated May 10, 2014. A National Instrument 43-101 (“NI 43-101”) technical report disclosing the Lemhi Gold Project MRE will be filed on SEDAR within 45 days. APEX believes the Lemhi Gold Project has the potential for future economic extraction.

About the Lemhi Gold Project

The Lemhi Gold Project lies within the Idaho-Montana porphyry belt, a northeast-trending alignment of metallic ore deposits related to granitic porphyry intrusions that extend north-easterly across Idaho related to the Trans-Challis fault system, a broad (20-30 km wide) system of en-echelon northeast-trending structures extending from Boise Basin more than 270 km into Montana. At Lemhi, gold mineralization is hosted in Mesoproterozoic quartzites and phyllites within a series of relatively flat-lying lodes consisting of quartz veins, quartz stockwork and breccias. The mineralized lodes are associated with low angle faults, folding and shear zone(s). The mineralized zones have varying amounts of sulphides (pyrite, chalcopyrite, bornite, molybdenum, and occasionally arsenopyrite) and free gold is common. The mineralization remains open at depth and in multiple directions.

All rock samples were sent to ALS Global Laboratories (Geochemistry Division) in Vancouver, Canada, an independent and fully accredited laboratory (ISO 9001:2008) for analysis for gold by Fire Assay and multi-element Induction Coupled Plasma Spectroscopy (select drill holes). Freeman has a regimented Quality Assurance, Quality Control (QA/QC) program where at least 10% duplicates, blanks and standards are inserted into each sample shipment.

The technical content of this release has been reviewed and approved by Dean Besserer, P. Geol., VP Exploration of the Company and a Qualified Person as defined by NI 43-101.

Freeman Gold Corp. is a mineral exploration company focused on the development of its 100% owned Lemhi Gold project (the “Lemhi Project”). The Lemhi Project comprises 30 square kilometers of highly prospective land. The mineralization at the Lemhi Project consists of shallow, near surface primarily oxide gold mineralization that has seen over 444 drill holes but remains open at depth and in multiple directions.

Freeman Gold Commences Drilling at Lemhi and the Beauty Zone

Freeman releases the highest grade intercept ever drilled at Lemhi from the remaining 20 diamond drill holes of the 2020 35-hole drill program Highlights include:

Freeman Gold Corp. has entered into an agreement with Canaccord Genuity Corp. and Stifel GMP, as co-lead underwriters, on behalf of a syndicate of underwriters,

Freeman Gold Corp. has entered into an agreement with Canaccord Genuity Corp. and Stifel GMP, as co-lead underwriters, on behalf of a syndicate of underwriters

Freeman Gold Corp. Appoints Will Randall as President and CEO 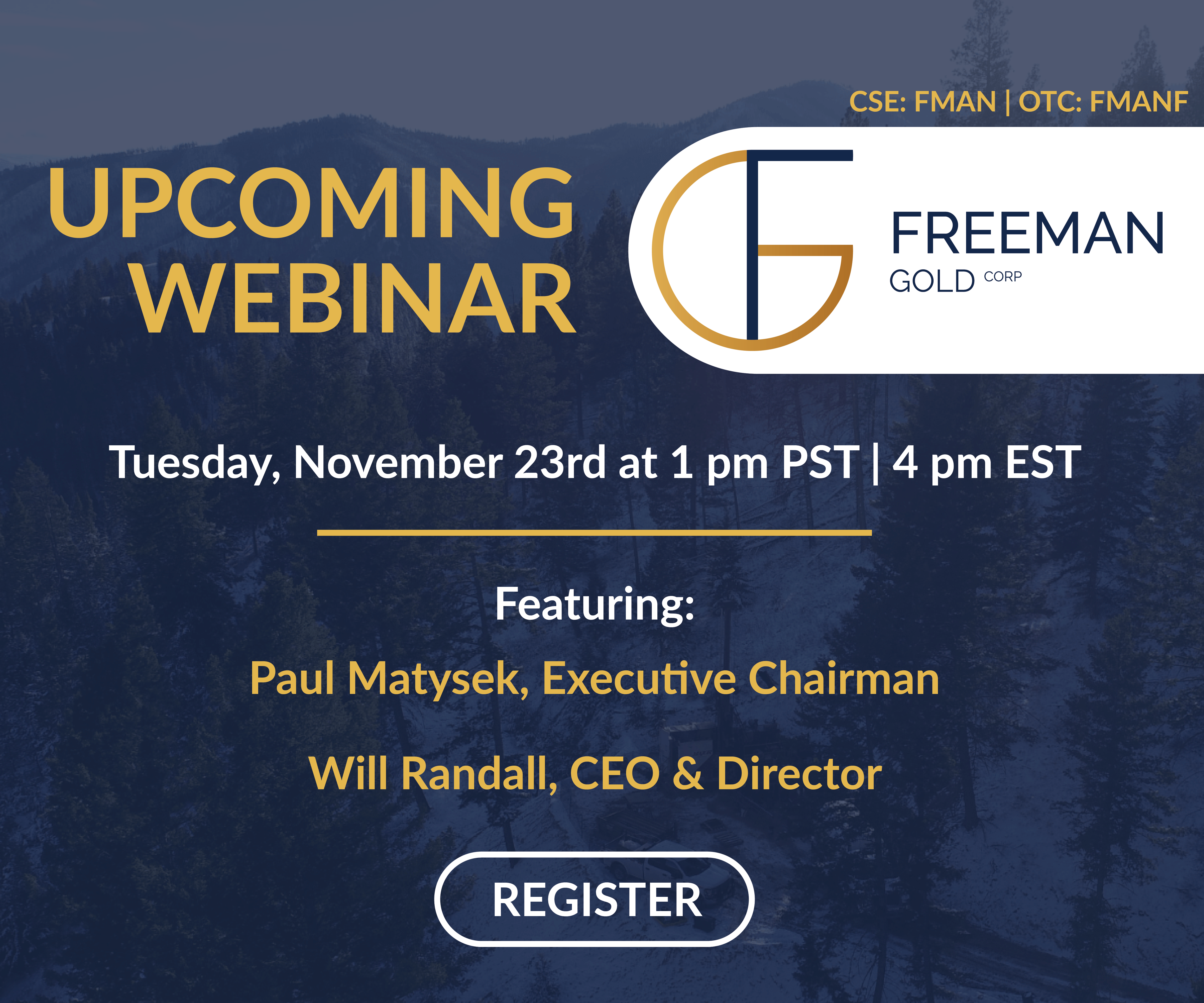